The fundamental laws of Infrared heating

As IR heating has evolved, so has the fundamental science that underpins the workings of its heat transfer, but three main laws apply:

The Steffan-Boltzmann Law relates primarily to infrared emissivity. Calculating the power radiation from an IR source based upon the object’s surface area temperature and together with a black body factor. A perfect black body has a factor of 1 – with other materials varying in that factor (see table below). When we allow for the emissivity of normal materials the Stefan-Boltzmann Law becomes:

Table of emissivity of various surfaces

Using this law means we can now calculate the net heat transfer between two emitting surfaces at T1 and T2. As both are emitting, the net power transfer will be the difference between both emitted power outputs. 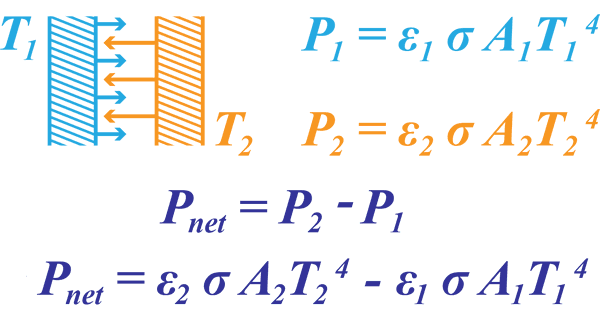 Planck’s Law describes the electromagnetic radiation emitted by a black body in thermal equilibrium at a definite temperature. It is named after Max Planck, a German physicist who proposed it in 1900.

Wien’s Law is a follow on from Planck’s Law and predicts the wavelength at which the spectral distribution of the radiation emitted by a black body is at a maximum point.

As the temperature rises, thermal radiation produces shorter wavelength, higher energy light. From the graph below, we can see how a light bulb produces a certain quantity of energy with only a small part in the visible spectrum. As temperature increases and the peak wavelength becomes shorter, the greater the amount of radiated energy.

The graph also shows that a rock at room temperature will not ‘glow’ as the curve for 20°C does not extend into the visible spectrum. As objects heat up, they start to give off visible light, or glow. At 600°C objects glow a dull red. At 1,000°C, the colour is yellow-orange, turning to white at 1,500°C. 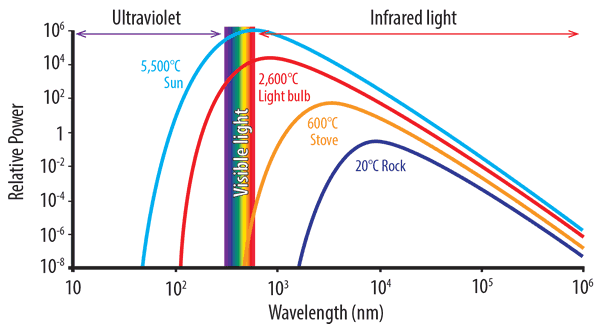 The Inverse Square Law defines the relationship of radiant energy between an IR source and its object – that the intensity per unit area varies in inverse proportion to the square of that distance. However, in practice, the Inverse Square Law is less effective when concerned with large parallel surfaces, such as heated platens and oven systems.

Lambert’s Cosine Law allows for the calculation of IR intensity when the radiation is not applied directly to the target body but is set at an angle. This law applies mainly to small sources radiating over a relatively large distance. 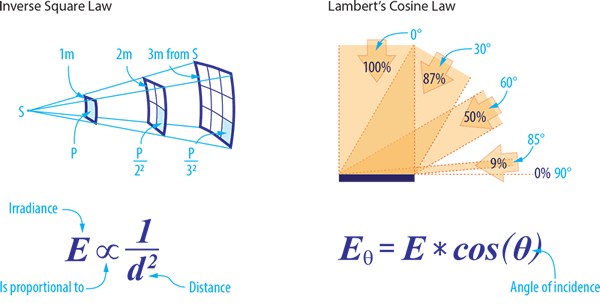 Infrared emitters used in industrial heating generally have a usable peak emission wavelength in the range of 0.75 to 10 μm. Within this range, there are three sub-divisions which are long, medium and short wave. 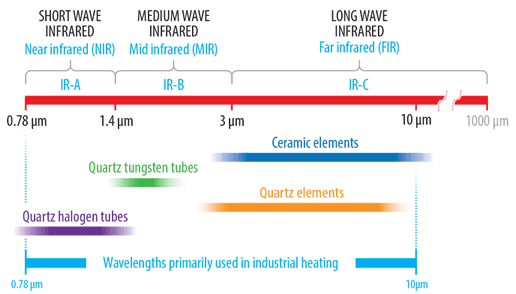 Longwave emitters, also known as far-infrared (FIR), have a peak emission range in the 3-10 μm range. This range generally refers to ceramic elements which consist of a high-temperature resistance alloy coil embedded into either a solid or hollow constructed highly emissive ceramic body. Ceramic emitters are manufactured in a number of industry-standard sizes with either flat or curved (trough style) emitting surfaces.

Shorter peak emission wavelengths are achieved by using emission sources with higher surface temperatures. Quartz cassette-style emitters are available in similar industry-standard sizes to that of ceramic and consist of a series of translucent quartz tubes built into a polished aluminised steel housing. These emitters can operate with higher front surface temperature and emit in the long to medium wave range.

At the shorter end of the medium wave range is the quartz tungsten emitter which consists of a sealed linear clear quartz tube containing a star design tungsten coil. The tungsten coil provides a fast response time with low thermal inertia.

The short wave quartz halogen range are of similar construction to that of the fast-medium wave tungsten emitter with the exception that a round tungsten coil is employed and quartz tubes are filled with halogen gas. The higher coil temperature results in the generation of white light and a peak emission wavelength in the short wave range.

Planck’s Law tells us that as the temperature of any emitting surface increases, more and more energy will be released as infrared energy. The higher the object temperature, the greater the amount of infrared energy will be produced. As well as becoming more intense (power) the emitted frequencies become wider and the peak wavelength becomes shorter.

At very high temperatures, not just infrared, some shorter wavelength visible light will also be produced. This is first witnessed as a dull red glow, then to orange, yellow, and finally white. Figure 1 (below) shows typical Planck’s Law curves for a range of temperatures plotted from 1050°C to 50°C.

The pink curve corresponding to 1050°C exhibits the strongest output. It shows the highest power output and its peak is at around 2.5 microns. This is followed by the curve at 850°C where the peak energy is less than half of that produced at 1150°C.

This is shown in Figure 2 (below). At 250°C, the blue curve can be seen to have an approximate peak ~ 6 microns, whereas at 100°C the peak wavelength is ~ 7.5 microns. Note also that the extent of wavelength is more evenly distributed and doesn’t exhibit the concentrated narrow peak seen at higher temperatures.

If we enlarge the same graph again and focus only on the lower temperatures as shown in Figure 3 (below), we see temperatures of 50°C and 25°C have peak wavelengths of ~ 9 and 10 microns respectively.

As experts in our field, we hope these pages of information will help you understand infrared better. The most important thing is to know what your material is and what you need your material to do. We can advise you on the rest!

We look forward to hearing from you

Get in touch with our infrared heating experts today